Make Your Wheelchair into a Costume

This year, for the first time ever, a store is selling costumes specifically for wheelchair users

A few months ago, Target announced that they would be selling two “adaptive” costumes that come with cardboard wheelchair covers that can be incorporated into the costume. The princess costume comes cardboard cutouts that make the shape of a carriage with wheels and a crown, while the pirate costume comes with a brown pirate ship cut out and includes blue round cutouts to go over manual wheelchair wheels and give the appearance of the waves of the sea. While these costumes do look like they’ll allow a wheelchair user to move around in them, neither costume comes with the actual outfit for the person to wear, such as a princess dress or pirate garb, and costs $45.

It looks like the Spirit Halloween store is also marketing “wheelchair” costumes that appear to be fancily decorated cardboard boxes that they’re selling for $99. These cardboard boxes are decorated to look like an ice cream truck, monster truck, rocket ship, or princess carriage. The boxes appear to go entirely around a wheelchair, thus both hiding a person’s wheelchair and making it impossible for a person in a wheelchair to actually move.

Given the limited options on the market right now and my deep love for both my wheelchair and for Halloween, I prefer to make my own costume. Here’s a few ways you can make your own costume that incorporates your wheelchair:

Make Your Wheelchair into a Car

I absolutely LOVE Mario Kart and I have a pink wheelchair, so one of my favorite costumes is to wear a fluffy pink dress and a crown, grab 3 balloons to put on the back of my wheelchair, and suddenly I’m Princess Peach from Mario Kart! Mario Kart has plenty of characters, so there’s lots to choose from with this theme. However, I have also turned my wheelchair into the Bat-Mobile by adding some black wings to it and dressing as Batman!

Your Chair is Your Throne

Do you love Game of Thrones? Grab some cardboard and cut it into a bunch of swords, affix those swords to your wheelchair, and now you have the Iron Throne! You can dress as any character you like and rewrite the ending so that your character wins the throne! Not into Game of Thrones? That’s okay, there are plenty of people who sit on thrones, including kings, queens, and people who have just eaten a bad burrito. Hey – there’s no limit to the kind of throne you can turn your wheelchair into!

Be a Character in a Wheelchair

Why dress your wheelchair up when you can just dress up as someone already in a wheelchair? There are plenty of great, funny, sweet, and creepy characters you could choose to be for Halloween who are wheelchair users. Are you a history buff? Dress up as FDR! Do you love Nightmare Before Christmas? Dr. Finkelstein is a great choice. Personally, I loved Coco and am really hoping to see a wheelchair user dressed as Mama Coco this year!

Please click here for a link to the original article written by Stephanie Woodward ; a brand ambassador for Quantum Rehab®. Stephanie has received many awards for helping communities become more accessible, as well as for her actions in fighting for the rights of disabled individuals as it relates to Medicaid and other support services. 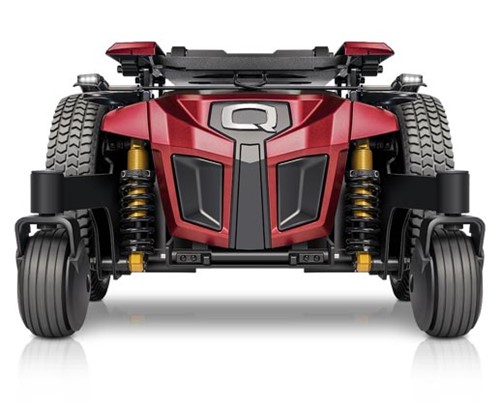 *Note the stores mentioned in this article are not in NZ.

The quote generator is only available to resellers, prescribers and technicians. If you do not have your website login details, please contact us to set you up with an account.

You are about to turn on Quote Mode. Quote Mode enables you to add products to a quote and generate a quote PDF which is then emailed to you. If you have products in your cart, they will be added to your Quote.

You are about to turn off 'Quote Mode'. All quoted items will be placed in your Cart.

Sign up to receive exclusive offers & learn about our new products and events.

You are signed up to receive Allied Medical email newsletters.